One Night of Queen 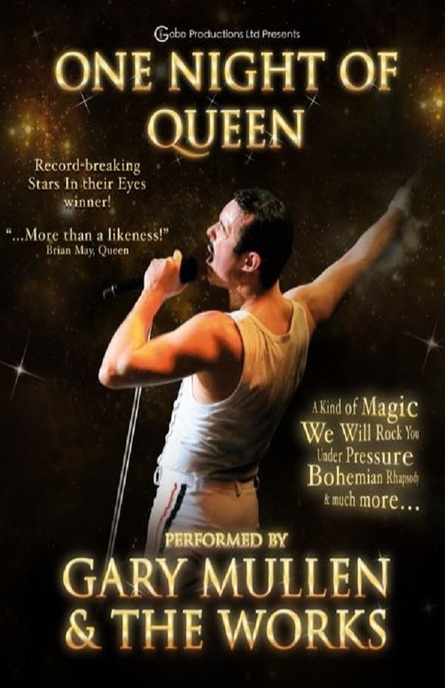 ONE NIGHT OF QUEEN

GARY MULLEN AND THE WORKS

In 2000, Gary Mullen won ITV’s “Stars In Their Eyes” Live Grand Final, with the largest number of votes ever received in the shows history.  The record of 864,838 votes was more than twice that of the runner-up.  Gary began touring on his own and in 2002 formed a band ‘The Works’, to pay tribute to rock legends Queen.  Since May 2002, ‘Gary Mullen and the Works’ have performed throughout the UK, USA, Europe, South Africa and New Zealand to sell-out audiences.  The outfit have also twice rocked the prestigious BBC Proms in the Park, in front of a very enthusiastic crowd of 40,000. One Night of Queen is a spectacular live concert, recreating the look, sound, pomp and showmanship of arguably the greatest rock band of all time. This show will ROCK you!

Unfortunately, and frustratingly due to the government’s announcement on delaying the road map to fully opening up the following shows have been rescheduled:
All tickets purchased will be transferred to the new dates and we will be in contact with those patrons who have purchased tickets.
CANCELLED SHOW
Barricade Boys – 2 April 2022 – this show has unfortunately been cancelled – all customers will be contacted over the next few days and full refunds will be given.
We are sorry that again we have had to reschedule shows but we must follow the governments guidance and we thank you again for your understanding and support.
For further enquiries please email box.office@thephoenixtheatre.org.uk or call the box office on 01670 367228 which opens Tuesdays, Friday’s and Saturday’s 10am to 12.30pm from Tuesday 15th June 2021.