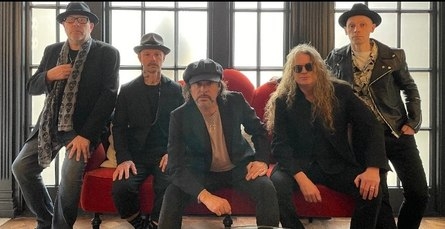 Following the band’s inception in London, UK in 1984 – originally as The Choirboys, then The Queerboys, before settling on the less controversial name of The Quireboys – there followed 6 years of hard graft and personnel changes before the inevitable happened – a UK number 2 album.

Despite supporting a certain Guns N’ Roses at the legendary Hammersmith Odeon in London it was 1990’s A Bit of What You Fancy that brought the band to the attention of the public at large. The record showcased no fewer than 5 hit singles – including “Hey You” which peaked at number 5 in the US Billboard Rock Chart and number 14 in the UK Singles chart.

Following their second studio album, 1993’s Bitter Sweet & Twisted, the band found the new mainstream rock landscape a difficult one – and it wasn’t until 2001 and the release of This is Rock’n’Roll that they found a new lease of life.

The public’s appetite for The Quireboys had returned and hasn’t waned since – 3 further studio releases (Well Oiled, Homewreckers & Heartbreakers, Halfpenny Dancer) were released on various labels from 2004 to 2009 before the band found their new – and permanent – home on Off Yer Rocka – the label of the renowned festival brand Hard Rock Hell.

The first 4 albums on Off Yer Rocka – Beautiful Curse (2013), Black Eyed Sons (2014), St Cecilia and the Gypsy Soul (2015), and Twisted Love (2016) – have not only grown the legacy of The Quireboys but have brought new fans to the fold. 2017’s White Trash Blues saw the band take a bold move – recording a collection of iconic blues numbers but with the signature Quireboys approach – a move that paid off with glowing reviews. Covering legends such as Muddy Waters, Chuck Berry, Freddie King and John Lee Hooker the album is a triumph of substance over style. The album produced a stunning single release – “Leaving Trunk” – a track written by Sleepy John Estes and made famous by the legendary Taj Mahal.

The Quireboys are certainly enjoying a revival – selling out venues around the world – with 2018 also taking in The Monsters of Rock Cruise, HRH AOR VI, Sweden Rock and Stonedeaf festivals. 2019 will see a brand new studio album – their 12th – as part of a pledge campaign… so be a part of the never ending Quireboys party – as there’s no sign of them slowing down any time soon!